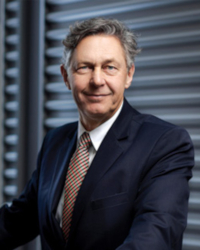 A serial entrepreneur who has successfully raised over $625M in financing and completed several acquisitions and sales transactions, including two IPOs and one management leverage buyout (LMBO). Mr. Boulanger has over 35 years of experience in senior management positions in several sectors, especially in the high-tech sector, with public and private companies. He has been a key player in carrying out complex financial deals as well as international marketing and commercialization strategies, and joint ventures. Mr. Boulanger had lead profitable international businesses with over $250M in sales.

Mr. Boulanger became LeddarTech’s CEO in 2014 after being acting CEO for two years. Since 2008, he has also been President of Moody Management Inc., a private investment firm. Prior to LeddarTech, he was the Founder, President and Chief Executive Officer of Groupe Unipex SAS as of 2008. He was President of the Active Ingredients and Specialty Chemicals Division of Atrium Innovations (TSX: ATB) from 2004 to 2008. Before joining Atrium, he was the Founder and President of Québec International following a partnership with Phénix Capital.

Over the course of his career, Mr. Boulanger has been a frequent keynote speaker at conferences, and has been actively involved with various committees, boards and associations. He currently sits on the boards of Chimie Parachem, Pieridae Energy and LeddarTech. In addition, he has been very active in Québec’s investment and entrepreneurial sectors with an investment portfolio of fifteen companies. Mr. Boulanger is also a limited partner of Fonds Innovexport (and representative of the private investors group) and a limited partner with Fonds Entrepreneur Capital Investments. He has been an active member of Anges Québec of which he was on the board of directors for over three years. Mr. Boulanger earned a degree in mechanical engineering from Université Laval in 1981 and graduated from the senior management program at the International Center for Research and Studies in Management (CIREM) in 1990.